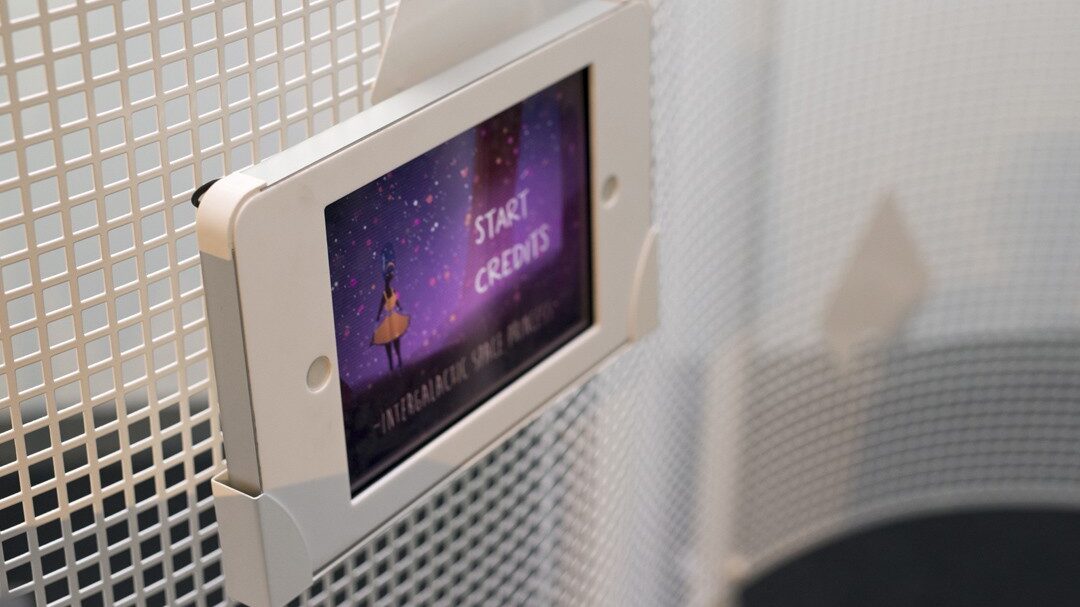 Most of our clients come to us to because they don’t want their tablets to move.  At least not very far.  That’s why here at Sprocket we spend a lot of time locking tablets down.  Of course, Sprocket X’s patent pending tilt-and-rotate mechanism is designed for both dynamic rotation between portrait and landscape [crucial for the full utilisation of many app features] and tilt, allowing on-the-fly adjustments of the screen angle for more comfortable viewing and interaction.  For most scenarios, these two planes of movement are perfect!  But occasionally, they just aren’t enough.

Moving with the virtual times

Take the National Motor Museum in Birdwood South Australia, who approached Sprocket when they had built a virtual reality app that took advantage of the iPad’s advanced movement sensors and allowed patrons to drive a virtual lap of a race course.  Pretty cool, huh?

It was a reminder of just how advanced today’s tablet technology is.  An iPad has both an in-built accelerometer and gyroscope, and uses Sensor Fusion to combine the information from these sensors to quickly and accurately detect motion of the tablet.  Which means for game and app developers, there’s a whole means of possible interaction to utilise beyond just touching the screen.

Now of course, while the museum wanted patrons to be able to pick up the iPad and use it like a steering wheel, they didn’t want the iPad racing out of the building!  The answer was X Flex, Sprocket’s neat solution which allows for handheld usage while keeping the tablet both securely tethered, and permanently charged.  With X Flex, you can set it and forget it, while patrons can grab it, not nab it.

A similar scenario presented itself recently down at Federation Square at Melbourne’s excellent ACMI museum.  Apart from being a centre of film culture, ACMI is also Australia’s national museum of video games, digital culture and art.  As part of a fascinating exhibition called “Code Breakers”, celebrating the achievements of Australian and New Zealand women working in video games, ACMI wanted patrons to play video games on an iPad.  Since the games also took advantage of iPad’s advanced movement sensors, X Flex was the obvious choice again.   In the exhibition environment, there was an extra requirement – ACMI needed custom wall brackets so that the iPads, when not in use, could be hung on a metallic mesh.  Here at Sprocket we eat custom jobs for breakfast, and within a matter of weeks the required wall mounts had been manufactured and delivered to Fed Square.

The other little fun non-standard job for the exhibition was some custom height X floor stands.  The idea was to allow patrons to sit on the Ottoman while interacting with the iPad.  Sprocket’s flexible X system allowed this without issue, and we think they turned out to be very cute [flick through the photos and see if you agree]!  The long and the short of it is, if you are in a tight spot, or have a little room to move, any of X Desk, X Wall and X Floor can be supplied with a stem of virtually any length you need.

Google Rating
5.0
Based on 43 reviews

Rosemary Lilburne
02:06 16 Nov 20
We ordered 8 of the free standing desk Sprocket X designs and they're great. The ordering process was streamlined and very quick and efficient, after purchase help and delivery were well communicated. The only issue we have had is that the cables provided don't work well when plugged into a PC, will need to be connected directly to a power board or something more substantial. I would absolutely recommend these guys to anyone looking for sturdy tablet holders for outstanding value and great customer service.Thanks so much team!

Jean Slattery
01:11 03 Sep 20
Fantastic correspondence and advice given on what product would best suit our clinic! Fast delivery also!All of our patients love the dispenser and say that the sanitiser itself smells great!

Colin Orchard
05:39 31 Aug 20
Can't fault the quality. Both the standard and heavy duty versions seem to be rock solid.

Margot Shannon
05:34 30 Aug 20
I can highly recommend Sprocket and their great stands and wall mounted hand sanitiser units. From the beginning, they were so professional and friendly and a delight to deal with. They understood the brief and got on with the job, and were happy to make small changes along the way. Our products arrived on time and were exactly what we were after. Plus the sanitiser gel smells really nice!

John Walker
02:40 19 Aug 20
I had doubts about the product and delivery but had to eat my words. The Products were well packaged for delivery and are great with the delivery much sooner than I thought given our current situation. Well done Sprocket. John Walker Owner Embassy "ontime"Collision Repairs. Northmead. N.S.W.

volunteer rmh
05:49 07 Aug 20
Sprocket you are amazing. We love your speedy service. Five stars are not enough. Thank you. The Royal Melbourne Hospital

Rick McNamara
03:30 30 Jul 20
Very happy with the product. It was produced and delivered quickly, and the quality is exactly what we were hoping for. I also appreciated the help in making sure the wall mount suited our existing sanitiser bottles. Thank you.

Kate Birley
01:31 11 Jul 20
Excellent customer service, fast delivery, easy to install, professional and eye catching look, easy to change hand sanitiser with two bottles that can be refilled with your choice of sanitiser. Highly recommend for clinics, businesses, offices and entranceways. All of this product is made in Victoria. Thanks so much for quickly bring this product to market :-)

Grace Gallo
00:44 08 Jul 20
Have just received my sanitiser station from Sprocket.I did a fair bit of research before deciding to purchase from Sprocket. I was looking for something that was practical, easy to use, economical, heavy duty but it also had to look nice in my boutique hairdressing salon.The Sprocket ticked all the boxes for me, the staff were friendly to deal with and communicated very well from before I ordered to after I received it.I would definitely order more products from this company and highly recommend them.

Nathan James
23:05 05 Jul 20
I ordered four of the freestanding hand sanitizer units for a building I manage in East Melbourne. They arrived promptly after order, were easy to assemble, well weighted at the base to stop them from falling, and look fantastic. The sanitizer smells pretty nice too! (Mint and Jasmine). Very happy with the product and customer service I received, all around fantastic job.

Josie Rae
08:00 03 Jul 20
Sprocket was only too happy to help me with purchasing 2 sanitiser stands for our offices. Great experience, fast delivery. The stands are compact, elegant and look great with our custom branded signage - exactly what we needed.

Chris Lindus
05:37 03 Jul 20
I love these new hand sanitiser stations from Sprocket. They helped me with my custom artwork and had them delivered within a week. I've had so many clients notice them and comment on how good they look. Two have asked me for details on where they could get some for their own businesses. Incredibly professional and pleasant staff to deal with as well.

Patrick Berry
01:34 03 Jul 20
The X+ range look fantastic, we love the quality and how our custom branding really make them pop! Thanks heaps Sprocket for another outstanding product!!!!

Paul M
05:11 01 Jul 20
Purchased an X+ Wall Sanitiser Station for the office, looks amazingly sleek and modern, unlike many on the market.Employees keep hand sanitising from the beautiful fragrance from the supplied bottles.Delivery was super quick and took a whole 5 minutes to mount and start pumping.Excellent customer service and product. Highly recommended!!!

Mark
03:58 11 May 20
Great products, service and communication from Sprocket staff and are always happy to help with custom modifications and fitment for various applications - Keep up the great work! We will be back.

Brad Rohde
22:20 11 Dec 19
Great service always. Quotes are quick to turnaround and stock is always manufactured and disptached quickly. Simon and the team are to be commended!

E T
11:13 07 Oct 19
Sprocket products have been working exceptionally well for over 3 years in our barber business. Over 50 people use it every day and it’s a solid as a rock.

Arnold T
04:29 07 Oct 19
Simon from Sprocket has been exceptionally great in providing advice and solutions for all our tablet enclosure needs. Great quality products - highly recommend!

Sarah Graham
06:12 01 Aug 18
Awesome product, I ordered a lockable IPAD stand to use at business conferences and received excellent customer service from the team. Simon is super star and very knowledgeable.

Habitat Digital
05:12 26 Jul 18
These guys go above and beyond! Quality products and great customer service, I highly recommend Sprocket!

Andrew Chan
03:55 22 Jun 18
Just stared working with these Guys. The beauty is within on this product. Full credit to the engineering that has gone into it. A+

Justin Appi
06:00 07 Jun 18
Have worked with Sprocket for a number of my customer deals. Great product and service.

Ken Woodland
04:44 16 Feb 18
Dealing with Sprocket Pty Ltd was a pleasure, some online purchases these days are very tedious, Sprocket was efficient in answering emails even at inquiry stage and continued great service through to order and delivery .I would not hesitate to use Sprocket again and would definitely recommend them to others.

John Pigdon
10:28 08 Jun 17
I only had a small order but these guys gave me excellent service. They have a great Aussie built product as well. Thank you.

Matthew Dworakowski
22:39 22 Mar 17
Absolutely amazing customer service. Had a very tight and important deadline and the guys at Sprocket went above and beyond to organise everything for me so I would get it all on time.

Britt Nichols
23:47 05 Feb 17
These guys are awesome! Friendly customer service, fast turn around time and with great results. Thank you!

SureBridge IT
04:30 12 Jan 15
Only found these guys recently but they have been great from the start. Thanks team.
See all reviewsWrite a review